2 Is My Lucky Number

February 14, 2017
I can still remember standing at the end of my dormitory hallway window with a friend in September of 1981 and watching a little blonde walk down the sidewalk at Evangel University. It was my freshman year and several of us in the freshman dorm had pledged to not date our first year of school. You know, focus upon God.

Well, that lasted about three days. As my friend and I were looking out the window, my eyes were drawn to this young lady. So, I turned to my friend and simply said, "I'm going to marry that girl some day." He quickly said, "Not Jane, she is a sophomore and you don't have a chance." 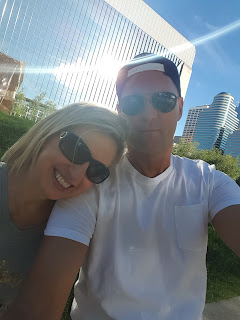 It all began looking out a window at the end of a hallway in Scott hall. True story. But, that is not the best part of the story.

So, about three days later, my friend and I are standing in line in the cafeteria waiting to eat. I spotted her sitting at her table. And kept my eyes on her and did everything I could to get to her table. We went through the line and approached her table where she was sitting with friends. I sat down next to her and introduced myself. And then I asked for her name. She replied, ‘ Jane.’ And promptly continued eating her meal without looking at me.

My reply was confident. “Great to meet you Jane, do you know that you are the second girl I've met here at college, and two is my lucky number.”

Needless to say, the whole table was in disbelief. I still don’t believe I said that. But I didn’t back down. The chances of that working were pretty low. I know, I know. The table was shocked. She just looked at me and then continued to eat and talking with her friends. Let's just say we didn't get off on the right foot together. But, I did learn one thing at the table. I found out where she went to Church. And felt called there the next Sunday. The following week at Church I asked her if I could pick her up for Church that night. Did you catch that? Our first date was at Church. On a Sunday night. Sunday night.

Three years later we got married. It was a great 34 years of friendship and we celebrated 32 years of marriage. And then it all changed.

December 18, 2015, as we were beginning this new organization, Jane passed away after battling cancer for the previous 16 months. It rocked our western mindset that viewed our marriage as near perfect and our family as untouchable. We really had only known harmony as a couple, satisfaction with our kids, and fulfillment with our work.

Today I am feeling first-hand what its like to lose My Valentine. When I first began to think that, if the Lord tarries, I would not have my best friend to speak with daily, our dates that we made public lessons out of on social media would never happen again, I would never kiss her again, my last child would not have his mother at his wedding, that other grandchildren would not know their grandmother, and Jane would not enjoy the fruit of our newly formed organization after more than thirty years of work together.

Here are two lessons I learned from My Valentine:


First, learn to forgive each other. This will be easy to do when you realize that people hurt people. We are human. And none of us is perfect. Some times we even hurt the people we love the most. Get used to saying "I am sorry, please forgive me." I'm not sure that you should take the advice of a friend of mine and start each week on Monday apologizing to your wife for how many times you are going to hurt her in the coming week. That may not be well-intentioned, or sincere, but there is a bit of truth in the thought. Remind yourself that you are not perfect and that you must learn to forgive daily.


Second, I have learned from Jane to laugh. Through 32 years of marriage we determined to have fun. We made each other laugh all the time. When we were first married we would sit in bed at night and sing hymns laughing out loud. One night as we were singing we heard a dog start howling right outside of our window. It may be memories like that or memories with the children, but, laughing is wellness to a marriage. In some ways, it says that nothing is going to weigh us down.

So, I lost My Valentine. But I learned so much from her. After saying goodbye to My Valentine about a year ago, I challenge each of you to forgive and to laugh. These two lessons have helped Jane and I through many experiences in life together. Learn the value of forgiveness and laughter on a daily basis. These will get you through all kinds of struggles and trials.