Leaving A Footprint On Our Culture

January 03, 2017
"I wanna leave my footprints on the sands of time, know there was something that, something that I left behind, when I leave this world, I'll leave no regrets, leave something to remember, so they won't forget, I was here."
-Beyonce', I Was Here 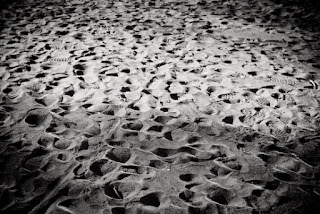 Have you ever seen the thousands of footprints on a beach? And wondered who these people were? Or what their story was? Let me ask you a question. What do you want your footprint on this earth to say?

Each of us are leaving a mark on the world we live in. In the middle of the 7 years of "The Teen Decade" (2013-2019), what have you done to impact our world? Over the past three years, I have been praying for seven years of awakening upon the youth culture in America. This song by Beyonce' has been ringing in my ears lately. I want to ask the youth leaders in America to be there. Wherever the students are, that we walk into their world and 'leave no regrets'. Will you be a part of it? It's simple, here is what we are asking for:

The process of communicating the Gospel in such a way as to make it meaningful to the people of any given cultural context. Contextualization has been defined so as to include socio-political involvement, incarnational lifestyle, application as over against exposition of the biblical text, and so on.

Being a part of culture is one thing. Understanding it and speaking into it is another. Many of us have a disdain for culture. But that is not going to help. Nor will it stop the influence of culture. Meaningfulness means that we not only in culture, but, that we are affecting culture

God's sociologist's understand the times and know what to do about it. What are the social and cultural issues we should be aware of? It may be marriage and family, the sexual revolution, personal identity and our place in the world, or even the social media and entertainment sector.

Who are the ICONS and the influencer's of this generation? Do we know who is speaking into the lives of teens today? Musicians (Bieber, Perry, Twenty-One Pilots, DNCE, or Dre), movies (Deadpool, Suicide Squad, Washington, or Stewart), or social media (Zuckerberg, Gates, Daly, or Kimmel). There are so many people and things shaping the youth culture and we don't know anything about them. As youth leaders we must have an informed platform that speaks to the social role models of the world teens are growing up in. Are you praying for these Icons?

Where is the youth ministry in the church? Have we lost our voice? There is such a great need for an awakening in the church today. To bring back the voice of truth, wisdom, and respect. Of power, courage, and Godliness. A need to gain the leverage that Christ so wants us to have. But, with our own compromise, fear, and classic arguments and language, we have lost our influence. There is such a rise in pluralism and humanism and meism that our generation has made another flight from the church.

This generation is asking a lot of questions right now. Is truth relevant to my lifestyle? What about absolutes? If God is so great, why is there suffering in the world? At a time when sin and paganism is rising, the church should be rising with it and not falling. Rising with truth and maturity and grace to meet the paganism of this world. Youth leaders who are not ashamed to preach and to teach the Word of God. To live before teens in such a way that they will see a clear picture of God in our lives.

I have been in youth ministry for 32 years. And the problem of broken homes has always been a growing phenomenon in the youth culture. However, I have never seen it like this before. I ask students all the time about 'family dinner' or 'family vacation' or 'family devotions' and have come to realize these are almost non-existent. We aren't simply raising a 'fatherless generation'. We are raising a 'motherless' and a 'siblingless' generation. Young people today do not have the influence of, and in some cases, do not even know their brothers and sisters.

If there is a time in history when Malachi's prophecy from chapter 4 seemed more needed, it is now. There is an absence of leadership in American homes that has added to the crime, sexual dysfunction, anger, lack of purpose, and economic peril so prevalent in our society. Strong and biblical male leadership is one of the most necessary ingredients modeled by spiritual leaders. In a culture of blended homes, it may take dads, moms, grandpas, grandmas, aunts, and uncles to build our homes.


Can you say, "I Was Here?" Will you leave footprints for the generation behind you? What are your steps saying about the way you live? To shape the youth culture in its setting is going to take intention and planning. It will take youth leaders who are willing to master each of these sectors and becoming professional at it.