Is Life Really Worth It?

May 11, 2015
So many people throw their life away as if it were a simple piece of unwanted paper. Is Life worth fighting for or throwing away? No matter what you are going through today, know this, Life is always worth keeping. Always. And it is always redeemable. Because your Life is sometimes more important to the One who gave you your Life than you may think your Life is to you. 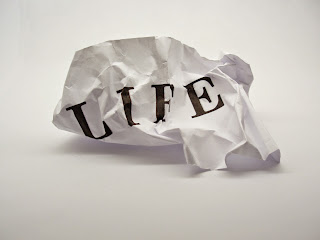 I was thinking today about all of the people who think they have it really bad and complain about life today. So many things are going wrong. Health. Family. Vocation. Debt. Reputation. Future. Many people simply say that nothing is worth it. The world is getting worse and we may as well throw it all in.


So the statistics are bad. So what?

We know the stats and have seen the degradation of our society. There is always a large part of the country thinking negatively and critically about the condition of society. And we can always find the spiraling changes in our culture that are telling signs that things aren't so great:


-media (Television, radio, print, digital, and internet news that reports on every negative trend going on. When is the last time the news led in with a Youth Group trip to Africa to build water wells or to stop Human Trafficking in India?)

-music and entertainment industry (The lessening values in programming and loss of moral control by the networks.)

-athletic and sports industry (Scandals are rampant in sports. Deflategate and abuse of women have been in the headlines for weeks. But what about the stories of the athletes who are making a difference in their community. The athletes who do not live materialistic and selfish lives.)

-modernist to post-modern worldview shift in education (From an enlightenment mind that had a humanist and moral template ready to solve human and world issues, to a post-modern mind with no universal code of right and wrong. There are no absolutes and we should celebrate tolerance. As long as we are not tolerant with Christianity.)

But, we must separate the cultural doom in society from our own personal lives. By understanding that cultural trends do not have to define my own life. By understanding that cultural issues do not have to determine my future. By living above the reports and seeing the future with hope. Hope is powerful. It creates. It trusts. When the pressure of life weighs in on us, we have a choice. Fight or flight? Compete or compromise?

Are we going to be consumers or producers of culture?

I love what Paul said in Romans 5 and 9, and in 2 Timothy 3 about grace in perilous times. That it would abound. And what Christ said in 1 John 4.1-6, as He was talking about the power of faith in culture, "You are of God, little children, and have overcome them: because greater is he that is in you, than he that is in the world."

Christianity should be impacting culture and not the culture impacting it so much. And that takes an attitude change. To see that government, media, education, or Hollywood are not the culture-shapers. One attitude change would be to see that maybe things are not as bad you think. Maybe the 'sky is falling' if you have a Chicken Little mindset, but, a quick review of history could also shed light on how people made it out of the tough times only about 100 years ago.

Is there really a difference between today's culture and 100 years ago? Here are headlines from popular newspapers in the 1900’s to the 1930’s in America:

I think our great grandparents and grand parents and parents made it out alive. Are things really any different? Maybe more prevalent. But, certainly not more severe. Listen, human nature in the 1st century or the 21st century is human nature. And our propensity for evil is as strong as ever. Sin will not let up. And the scriptures say it will increase. But, what is more important is that we see our desire for holiness increase. And that we see Christianity as a producer and not merely a consumer in society.

One generation made it out of their struggles. And that means that this generation will make it out of our struggles. So, to all of the people who think they have it really bad and are complaining about life today, how about an attitude change? Instead of seeing so many things that are going wrong (Health, Family, Vocation, Debt, Reputation, and Future), look at what is happening in America from a different perspective. Turn these things around. Get healthy and value wellness, don't give up on your family, do what you love to do, exercise financial discipline, make the right choices, and know that the best of times are coming.

Because tomorrow is going to be a better day than today. If you would like it to be!