Almost. The Super Bowl And Christianity. 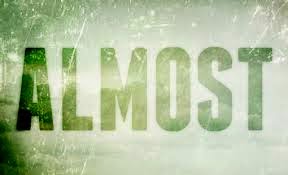 Almost. The Super Bowl 2015 finish was a roller coaster of emotions for everyone watching. The last 30 seconds swung all of us (Patriot or Seahawk fans) from one feeling to another.

I want to take that word and apply it to a generation that is not quite there with their faith in Christ. They are on the 1 yard line of faith in God. But, if they do not settle the faith question, they may end up losing it all. Jesus said in Luke 9:18-20, “Who do you say that I am?” Answering this question will complete your faith. This is the question of our generation. Maybe this will help.

This generation in The Teen Decade (2013-2019) does not have a faith problem. You talk on the phone without seeing the other person, type or Skype on the computer/internet and don’t see the other person, text incessantly to someone you cannot see, or even drive on the highway and trust the other driver coming right at you isn’t going to cross the dotted line and run into you.

This generation in The Teen Decade (2013-2019) has a faith in God problem. For many reasons. But, maybe because Christianity places claims on our lives that can be uncomfortable. And that can be a deal-breaker. But, whatever is shaking your confidence in a God who created you and has a plan for your life, there is a path to faith in God. You can know that God is who He said He is.

Almost. Not fully there. Like the last play of the 2015 Super Bowl game. Did you think that Seattle won? That the Patriots lost? How do we know really? Know that there is a God. And that He is who He says He is? There are many ways that lead to an answer to this question. Let's take a look at 5 ways to bring this generation to complete faith:

The First Avenue to Christian Faith is History
We cannot scientifically prove that Jesus or Napoleon lived, but historical record proves it. History and faith are connected by record and relationship that is processional and trustworthy. For instance, do you think that our cynical society is the first generation to question Christianity? Hear me, if Christianity was a hoax, it would not have lasted beyond the current minds that lived in the first century through third centuries. The historical record was passed from the 'living circle' of people around Christ and on to us today.


The Second Avenue to Christian Faith is Geography
When the bible states that a river, or a mountain, or a city exists, we can actually see it today on an atlas or map. Or, better yet, we can visit it. If the bible didn’t lie about these things, why would it lie about Christ, His teachings, or the miracles? Don’t you think that if the records of bible writers pertaining to geography were fake, that it wouldn’t have lasted one decade? The bible is a factual representation of geography in the purest sense.


The Third Avenue to Christian Faith is Morality
The message of God and the bible is not a fairy tale. It is real. How do we prove that? All of creation works under a system of order and structure. The struggle for right and wrong and good and evil didn’t originate with George Washington. History traces morality straight to the bible and not The Declaration of Independence. Your pastor or mom and dad didn’t make this up to punish you or keep you from having fun. Christianity is the root of morality and it began with Genesis and not some pop icon or philosophy teacher at your school. Faith needs a set of mores or standards to begin somewhere. Show me another original system that sits beside the bible and Christianity with integrity and authenticity.

There is a crisis in our generation. That we are serving a God we do not know.

From my observation over the last 30 years, much of this generation has had an external faith. Our American and western faith is something we put on like a glove, hat, coat, or glasses. And then we take it off when it is convenient. But, that is furthest away from the reality of Christianity. Christianity is internal and becomes who we are and not simply what we do. It affects our actions and our lifestyle. It is personal. And I know that if you will seek Him you will find Him. For to know Him is to serve Him.

Almost. Back to the question of this blog. How do you know there is a God? Can you know for sure? I know this, that God will reveal Himself to you if you will seek Him. You might say that would be a prophetic avenue to which God could prove His kingdom to you. But, let me give you one more characteristic.


The Final Avenue to the Christian Faith is Personal
We can talk history, geography, morality, and Christ to the hardest person. And I would get an argument. There may be an argument to the previous avenues. But, there is no argument to the personal experience of a sincere person. Not even someone others might say is 'sincerely wrong'. Wrong is in the eye of the beholder at that point and only eternity will be the judge. What I know to be absolutely true is that nothing else changed my life. You cannot look me in the eye and tell me that I haven’t experienced God/Christ first hand. Athletics, alcohol, money, fame, knowledge, music, or my family didn’t change my life. I could tell you of several times in my life where God revealed Himself to me. And changed my life. I have felt Him intellectually and with my emotions.

Finally, I'm not sure what is keeping you from complete faith in God. Some will try to use evil, or disease, or poverty/injustice, or doubt, or some argument that we cannot see God in order to debate Christianity with you some day. What are you going to say to them? Is this your faith and is He your God? Almost is not enough. It wasn't in the 2015 Super Bowl game and it never is. Jesus said in Luke 9:18-20, “Who do you say that I am?” Answering this question will complete your faith. This is the question of our generation.