December 03, 2014
Why is an older generation hurt by racism in the past not doing their best to allow this generation to heal? Wasn't it painful enough 10 or 20 or 30 years ago? Why would so many parade hatred to combat hatred? I think the message of the day should be gracism. This would be so much easier if we had a leader in America step up and take control with strength and humility and love.

I'm not telling you that racism doesn't exist. I wouldn't even think of it. It is one of the worst sins in our nation. It has divided for centuries. And I cannot imagine how much it hurts. To try and erase it would be like telling you alcoholism or gambling or divorce doesn't exist. We have all been mis-treated by prejudice or partiality. But, most of us have never experienced racism. Whether we are rich or poor, tall or short, conservative or liberal, Christian or Catholic, or black or white or Hispanic or Asian. Racism and inequality and prejudice exist. And it is quite painful for those who experience it the most. What are we teaching our children through social media and television? For today, let me deal with this quick thought from Frederick Douglass, a civil rights orator and preacher in the mid-1800's: 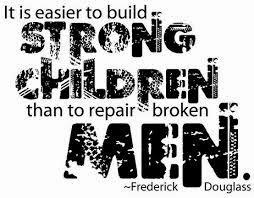 The young people that I speak with every day are tired of the hatred, the violence, and the anger. As a matter of fact, what I have found in more than 30 years working with young people is that they are much less racist than the voices in America today who will not let us forget about, and, be healed from the past. Wouldn't it be much more receptive for these voices to help a generation mend from the past than to keep them remembering the past? What we have seen in America lately is dis-heartening. And I believe it begins with adults, and specifically, fathers.

Malachi said very strongly in the end of his book of the Old Testament, that "God would restore (turn or shift) the hearts of the fathers to the children and the hearts of the children to the fathers." And that God would not curse the land who would experience this. And Paul said in 1 Corinthians 4.15 that the people of Corinth had "10,000 teachers but not many fathers." With everything we are going through in America right now, we need more fathers and less voices.

Too many want the social media moment. Too many are running up to cameras and promoting themselves. Too many want an interview on CNN or FOX. Too many want to sit with the President in Washington, DC. Too many are protesting and holding signs across our country. Where is the leader today who will inspire a generation to dream a better dream? Martin Luther King, Jr. would quickly silence the angry voices today who think they are speaking healing to our nation. I know we have rights. This blog is not about rights. And, central to the first amendment is the right to speak. What I am suggesting is that our speech is at least truthful. And healing.

The right to build strong families should be a greater right for all of us now. And that begins at home. I don't think we have as many leaders in the home as we should. Being a father to our children and the children in our neighborhoods who have no father is the more important right at this time in America's history. Everyone wants to picket. What about placing that much passion in our parenting?

Although none of us is perfect, there are plenty of examples of equity and diversity in our world. And much of it starts with the youth. The growing and diverse youth culture in America today must rise up and share their story of love and inclusion:
Of course, there is another narrative in our society. Racial tension. It doesn't help while watching the news. Tonight, while watching the protests in New York, a news reporter from a national newscast was walking through the streets and grabbed several random teenagers from the crowd that was walking by. The question was clear and simple. "Why are you out here tonight? And is what is happening here tonight all about racism?" The response from the young teenager was revealing. She said, "Yea, it's racism. Um. Well, I don't know if it is or not. But, I don't know." She clearly didn't even know why she was marching and screaming in the streets. You could see the confusion on their faces. I wanted to just sit down and talk with them. To parent them. And then there were many others who are trying to calm the others down. Why are we not interviewing them? Is it sensationalism that sells? Or that gets ratings? That is a consumption problem.

There is so much young people are trying to put behind them. Aside from racism, they are running from the pain of broken homes, authority figures they cannot trust, and a religious community that is still trying to find its place in American culture. They want to move on. Maybe as adults we could help them move on by giving them the hope of a better future. And to bury the past and be healed ourselves and to forgive. Maybe as a nation, we should change the way we color America with news casts that are so negative and slanted? Why not talk about the people who were actually trying to stop the looters. Why not do television coverage of young people in high schools all over our country having forums and peaceful conversations about all of this? What are we teaching our children?

We say often that America needs another shift. That our culture needs a revival of some sorts. I believe that shift begins in the home. With fathers (and mothers) who are dedicated to training their children and not letting the media or the angry voices from the past color our nation. Change the narrative. Change the rhetoric. Here are some great comments I have heard this week:
"Role models used to be parents"

"If you cannot find a role model, then be one"

"If the truth hurts, then we really needed it."
"A role model is quick to show you and not merely tell you"

"All of us need someone in our life that is willing to tell us the truth. Not just the past."


"As much as we are watching children to see what they will do with their lives, they are watching us to see what we will do with ours"
If we want to see a shift in culture, we must focus on building boys and girls. And not trying to fix men. Because if we are resigned to fixing men, we have lost another generation. Praying for another great leader to step up and not fear the crowds, to help us put the anger aside, and to see a nation rise up in love.