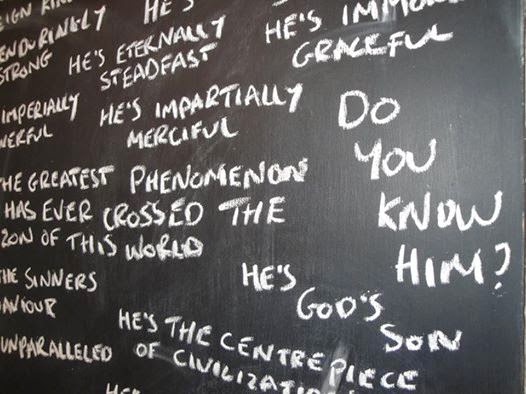 This is random. I have been thinking about why teenagers, or anyone for that matter, do not serve God. Christ. Why they wouldn't follow Christianity.


There are many reasons for sure:
All of these are accurate. I'm sure most of us deal with these at some point. Especially with certain Christian principles that are 'grey' areas or place tighter fences around us. But, to be honest, if we were to lay all selfishness aside, I really believe the reason most teenagers do not serve God and Christianity is because of a lack of knowledge.

To know Him is to serve Him. I truly believe that if we can get people to know His character, His attributes, His traits, and His justice, it would settle any doubts we have. The problem is getting people to think outside of themselves. And to see how vast a knowledge of Him could actually be. Let me say, the more you get to know Him, the easier it is to serve Him. Could you really leave Him out of your life?

Knowledge. Such a tricky thing. But, so powerful. The people that do not serve God are generally the people that do not know Him. For knowing Him is the assurance of serving Him. Of course I know that sounds trite and judgmental. But, think about it. Could it be that the reason one teenager doesn't believe is because they have a world-view that Christ was not the Son of God and merely a great iconic figure of the 1st century. Until that person is presented with the truth and the proof of His sovereignty they may not believe. But, when this is laid out in undeniable logic and faith, I am confident that they would be without excuse. (Romans 1/Hebrews 1)

Let me explain it this way. We have heard all about the Grand Canyon. We've seen pictures, heard lectures, read articles, and maybe even saw a movie or video clip. But, until you stand there on the rim of that Canyon, you do not get a real view of the awesomeness of the phenomenon that is the Grand Canyon. Two years ago I walked up to the edge of the Canyon wall and couldn't believe what I was seeing. Until I saw it first hand.

If we are willing to receive truth in exchange for the lies and the mis-understandings that we have of Christianity, there would be no doubt about our ability to believe. The more I understand Christ and Christianity, the jump to belief is just not that broad.