Disney and the Dead Sea

May 25, 2011
It has been a few years since I have been to Disney World, but, my simple comparisons on my first trip to Israel reminds me of those 4 or 5 visits to Disney with the family. You can never get it all in with one visit.


Leaving the region of Galillee today was somewhat disappointing. There is so much to see in the area with so many impacting stories. One thing I have learned on this trip is that you could almost visit one region and spend a week in that area before moving to the next. The format for this blog is going to be a "picture-ography". I will post the pics and place a caption of what God was teaching me today with the photo. Here we go... 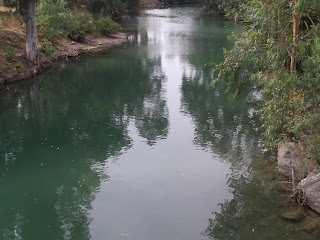 The Jordan River where we were baptizing today. Probably around 200 people or more getting baptized. All kinds of faiths and methodolgy to baptizing today. There were some who were kneeling, others who were being sprinkled, and the wild bunch being dunked!

Since we are in the Dead Sea Valley, the internet is too slow to add more pictures. But, I have loaded over 30 photos from my camera to Facebook. Please check those out. These photos tell the great story from our day.


We walked into Beth She'ann this morning after baptizing in the Jordan. It was about a 45 minute drive south along the border and when we arrived we opened our bibles and read from 1 Samuel 30-31. It is the story of Saul and his sons fighting against this Philistine city. We climbed the hill where the philistine army taunted Israel and King Saul. In the end, Saul and his sons were defeated and hung on the wall of the city.


What was wild was the fact that even though the city has been buried and the remains are being dug up, we were standing on the hill the Philistine army was standing on above their city. Steve and I yelled out across the valley to the bus loads who were walking through the city with tour guides so that everyone could hear it, "For the army of the Lord!" It didn't change the battle some 4,000 years ago, but, if Steve and I were there fighting that day, it might have helped! That was intense.


Floating in the Dead Sea. I felt like an astronaut. While floating in the Sea I could see Mt. Nebo to my left. That was where Moses was taken up by the Lord before he would see the promised land. I kept looking to see if he might appear and look down upon us. Didn't happen. Then, while floating, I turned to my right and saw the Mesada. The vacation palace of King Herod. A towering structure overlooking the region. We are visiting that tomorrow.


And then off to Jerusalem for the weekend. That is going to be life-changing. Please stay tuned for more.